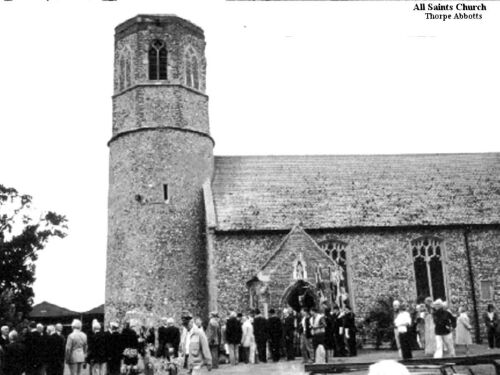 Situated on the north side of the Waveney valley and on the A143 Bury to Yarmouth road, part of this church has stood since the 10th Century, as dated by a Saxon arch in the north wall.

Bryant, in his “Norfolk Churches,” tell us that the Manor at Thorpe Abbotts in King Edgar’s time (944 - 75) belonged to Ailfric the Good, Bishop of Elmham, who gave it to Bury Abbey to which it belonged until the Dissolution. The Manor was apportioned to the Abbott’s own use, hence the suffix to distinguish it from the other Thorpes in the area. Sometimes called Thorpe Magna, being larger than Thorpe Parva close by, the name changed in later years to Thorpe Cornwallis after the Lords of the Manor from 1546. The original name of Thorpe Abbotts re-appears in the 17thcentury.

At the Domesday Survey the Manor was seven furlongs long by six broad and at present is about 1150 acres. About a century ago the population of the parish was256. It is now under half that number and unhappily becoming less each year. The parish has been combined with that of Brockdish to the east since 1931.

The first Rector, Peter de Tatington, was appointed in 1303. The building is of flint, mostly in the Perpendicular style. The Norman Tower, the upper octagonal section was added later, contains two bells, one cast by John Darbie in 1678 and the other by John Goldsmith in 1712. It is said that there were three bells in 1552 but that one was sold to Hoxne across the river. In Blomfields’ time (late 18th Century) there was a clock in the tower.

The church was partially restored in 1862 by the Rev. W. Wallace (Rector 1838-1869) whose memorial window is at the east end. The other stained glass window on the south side is Mrs. J. L. King, who lived at Thorpe Hall Farm (1869-1876) and to whose memory was also erected the iron gates of the Churchyard in 1885. The wrought iron name over the gates was donated anonymously in 1967. Over the vestry arch are the arms of George III after 1816. The Rood Screen which has been cut down to fit the Sanctuary arch, once had panels in the lower section on which were paintings of the Saints. These appear to have been removed for easier access to the clergy and choir stall. The pews and pulpit were renewed in 1864. The Church, but not the chancel, was re-roofed in 1888 at a cost of 220 Pounds, raised by subscription.

The south west door is of 14th Century origin and the fine old wooden lock still works. In the north wall is a specimen of a pointed Norman door probably of the 13th century. In the tower is an original flue which was connected with an oven for baking the Wafer Bread.

The octagonal freestone font of the ‘evangelistic type at one time presented a smooth surface, having been infilled with plaster at the time of the Reformation. The Rev. Wallace suspecting this, discovered the carvings by removing the plaster with his pocket knife. Evangelistic fonts, so named because of the carvings of symbols of the four Evangelists, occur in other Norfolk churches, but all are within seven miles of navigable water. The limestone from which they are carved was probably transported from Lincolnshire by water and carved on the site by a mason imported for the task.

The Registers date from 1560 and are in excellent condition. Of interest are the “Instruments of Enclosure” and associated map, showing common land. The oldest Terrier, dated 1685, describes the church lands by their ancient field names, now rather difficult to locate.

In welcoming you to this Church of All Saints may we bring to  your notice the zeal with which the P.C.C. of this small Parish are attempting to preserve this goodly heritage, which they willingly accept as sacred trust.

The church was re-roofed in 1888; yet had to be re-roofed a few years ago; the Chancel Roof and Porch were completed more recently. Our greatest achievement is the repair of our Norman Tower at a cost of 1,500 pounds.

Thanks to the munificence of some of our parishioners, we have installed a most successful electric heating system into our church, and much improved the lighting.

As you enjoy the peace and tranquility of God’s House, please remember those who continue in the worship of Almighty God, Sunday by Sunday, in this place. We hope the many people who visit this House of Prayer, will remember their Maker, and perhaps leave an offering to help the good and necessary work to continue. Please help us with this work to the greater Glory of Almighty God.

The Rector and Church Wardens.