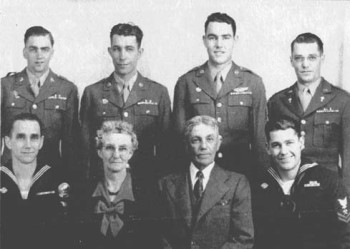 My five brothers and I grew up on a farm in the lean years. My dad could not promise anything, but we all went into the service, got good educations and good jobs with pensions. Before being drafted two of my brothers, Clarence and Veryl and I worked for North American in Kansas City building B-25’s. We three got into the Air Corps. My parents, Charles and Tressie Wilch, worried about us being in the war, but were also very proud of us. There is a photo of mom in a rocking chair on the family farm and in her arms are her son’s photos; Cletus, Kyle, Harold, Clarence, Veryl and Merton. Cletus, the oldest, was in Patton’s 3rd Army as a chaplain. He was the first to enter the service in 1942. In 1947, he was the last son to come home.

By 1943 Kyle was in the Navy. The 72nd Naval Construction Battalion was sent to Honolulu to build living quarters, then to Guam. Airfields used by B-29’s to drop the atomic bombs on Japan were built by the Seabees. Kyle came home in 1945.

Harold was the last to enter the service and chose the Navy. He became a metal smith as well as completing engineering school. First Class Petty Officer Wilch was assigned to the transport ship Newberry, which carried men and supplies for the attack on Iwo Jima. On December 24, 1945 the Newberry sailed under the Golden Gate Bridge and Harold came home. 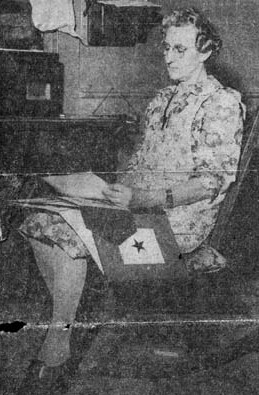 Clarence volunteered for the cadet program in the Army Air Corps in 1943, but the need for ground troopsreassigned men to the infantry. What no doubt saved his life was that he was skilled in plumbing and had not been trained for the infantry, so he was assigned to Guam for refrigeration maintenance duties. Most of the men that went into the infantry units ended up at the Battle of the Bulge and were killed. One interesting thing happened while Clarence and Harold were at sea, of the hundred of ships docked together their ships happen to be moored next to to each other and they had a brief but happy reunion. In 1946 Clarence came home.

Veryl, was in the Army Air Corps as a ground crewman and was stationed in the South Pacific on a island about 400 miles for the Philippines. The island still had Japanese soldiers on it so there was little time to let your guard down. Veryl came home in 1946 after being based in Korea.

I was in the Army Air Corps, 8th Air Force, 100th Bomb Group on the Murray D. Johnson crew as a top turret engineer. Of the fifty-five crews that we trained with in Dalhart, Texas, five were sent to Thorpe Abbotts a few weeks before D-Day. The first of our five crews (the crew John F. Ryan, Jr.) flew their first mission the following Sunday, June 12th, to Rosieres, France and were shot down along with the Edward P. McKeague crew. On Ryan’s crew only the radio operator, George L. Sherback, survived. On McKeague’s the TTE George H. Penman and RWG Robert Gallagher were rescued from the English Channel. My 19th mission was July 29th, to Merseburg. Another of the five crews were shot down. The Eden C. Jones crew lost all but four, the NAV Albert B. Fincher, Jr., BOM Cordy A. Ramer, Jr., WG Frank J. Moran, Jr. and TG Jerry R. Cassell became POW’s. We lost a total of eight crews that day. Of the crews that joined when we did three of the five crews finished their missions. My last mission to Magdeburg was on September 12th, 1944 in the B-17 42-32090 known as "Silver Dollar". I flew 32 missions and when the pilot got in 35 we got to go back to the States. I was glad to be going home.

I enjoy Splasher Six and have contact with only one crew member, our tail gunner, Richard Thormahlen who lives in Arkansas.

Of the six of us that were in World War II Clarence and I are left. We lost Cletus in 1993, Kyle passed away two years later in 1995, Harold passed away in 2003 and we just lost Veryl in October 2004. When Clarence and I were recently interview by Tim Carpenter of The Topeka Capital-Journal newspaper we told him we were lucky all of us made it back and without a scratch.