The Fog of War

Editor’s Note:
On May 24, 1944 at 0655 hours eighteen aircraft of the 100th “A" Group and seventeen of the “B” Group set out for Big “B” – Berlin. Nine crews would not return.  The following is the story of that mission from Group Narrative [Official 100th BG Post-Mission Report], formation charts, and through the eyes of Frank Malooly, Maurice Fitzgerald, Anthony Lombardi, Fred Cebalo, Edwin Stearn, Jim Brown, and CENTURY BOMBERS.  Most of us have heard the phrase “the fog of war”, but few, save those who have served in combat, can truly understand the full scope of the statement.  So much happens so quickly, and what seems perfectly logical and, perhaps, maddening from one perspective, is totally different from another.  This mission is a good illustration of that.  Many of these men have since passed away, but their written memories bring this mission alive for us. Following this account are two more individual narratives by Neil Jespersen and Robert Black.

There have been many debates over the years by scholars and historians about the USAAF policy of assigning stateside Training Command officers into combat theater positions of leadership without proper "hands on" experience. In some cases it made no difference while in others, it could be dangerous.  On May 24, 1944 the "fog of war" would prove disastrous for the Bloody Hundredth.

It began normally.  The “B” Group, leading the Combat Wing, would take off first with Col. Ollen Turner in command flying with Captain Jack Swartout. The General Narrative report tells us that seventeen aircraft including one P.F.F. departed the base at 0640-0654 hours.  By 0750 hours the group had assembled over Splasher #6 at 12,000 feet.

“It was a complete disaster from beginning to end,” recalled Pilot Frank Malooly.  “After take-off the Group leader had difficulty forming up with the Wing for some unknown reason.  We started across the North Sea badly strung out and way behind the rest of the Wing, which he was trying to catch up to.  Very stupidly we entered enemy territory in this same condition and our low squadron, led by my close friend Mark Wilson, was badly strung out and behind us several hundred feet.”

The 100th "A" Group lead B-17 was 42-97845, with Command Pilot Major Maurice Fitzgerald, aboard on his fifth mission, and piloted by Captain James Geary.  Geary, who had already completed one combat tour with the 390th Bomb Group (in the famous B-17 "Pistol Packin Mama"), volunteered for another and was assigned to the 100th.  “That is what impressed me so much about Jim Geary,” wrote Maurice Fitzgerald in 1987,…he volunteered for a second tour!” 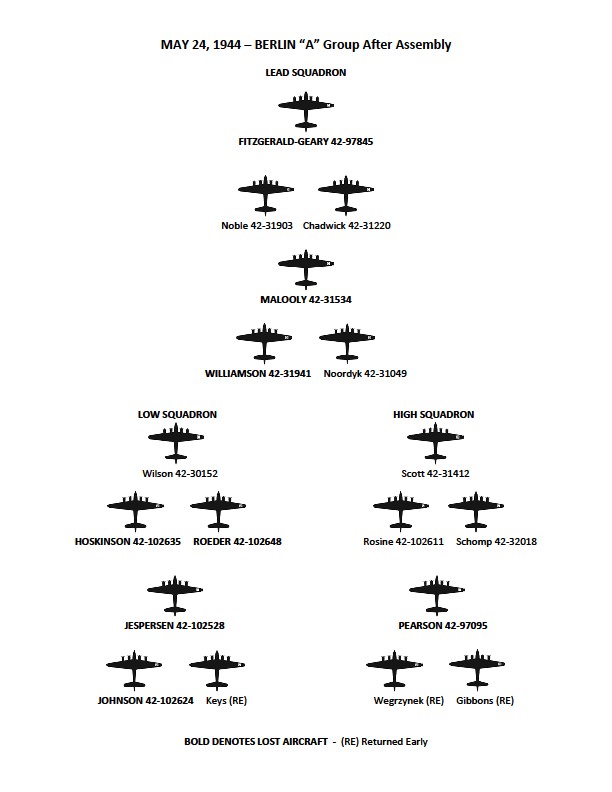 table’ for the Luftwaffe and were soon attacked by a large group of enemy fighters. They decimated the low squadron

The aircraft flown by Martin Hoskinson and Robert Roeder were two of the first hit.  According to a letter from a German researcher, their crash sites

were only 200 meters from each other.  He further writes that the German fighter pilots noted how difficult it was to see. “They said it was a milky haze from the cirrus and from the smoke of the engines.”

Anthony Lombardi, TG on Roeder’s ship, saw something whiz by his position and asked what it was.  “Soon McElroy [BTG] called on the intercom to say the door fell off the ball turret, and he had narrowly escaped falling out sans parachute.

“McElroy was ordered to the radio room to complete the mission.  I called out fighters at six o’clock as the navigator [Claude Robison] called an attack at twelve o’clock.  We were also attacked at nine o’clock.”

After the loss of its wing, the aircraft broke apart somewhere between the radio room and the tail.  Radio Operator Frank Goldstein fell from the aircraft without his chute.  Nathan McElroy, whose chute was lost when the ball turret door fell off, was able to grab the chute from the radio area, put it on, and bail out safely.

RWG on the Roeder crew, Fred Cebalo remembered the wing being shot off their aircraft.  “I was thrown back and trapped in the waist, fracturing my right leg.  As I was trying to get out, the ship broke at the ball turret and tail section.  I crawled to the door and jumped.”

Fortress 42-102635, piloted by Martin Hoskinson and co-piloted by Marvin Apking, who with their crew were on ‘their first or second mission’, was from the 349th Squadron.  All ten men were killed.
This crash was also documented by the German researcher.  “The plane came down out of the clouds and crashed into the earth exploding and burning with a big cloud of smoke.  Nine airmen in the B-17 were dead inside the plane and burned, and the tenth lay outside the plane on a field.”

The Clarke Johnson crew flying A/C 42-102624, were on their first mission.  Seven of the ten men aboard were killed.

Jespersen’s crew, flying 42-102528, bailed out with their ship on fire.  Pilot Neil Jespersen and Co-Pilot Robert Atkins were taken prisoner, together with engineer George Kostoulakos, waist gunner John Legg and bombardier Joseph Savino.  The rest of the crew was KIA.

Mark Wilson’s aircraft was seen leaving formation on fire but under control.  Mark became a POW three missions later and, when bumping into his old friend, Frank Malooly at Stalag Luft 3, told him, “they got back to England by hitting the deck, but lost the rest of the squadron.”

Now the “A” Group is down to nine aircraft. [See formation sheet over target.]

“What was left of our Group,” said Malooly, “finally caught up with the other B-17s, and I have no idea if with our proper Wing.  We proceeded to Berlin and dropped our bombs.  While still in heavy flak over Berlin I noticed the lead plane lose altitude and starting a right turn which was the wrong way. I called on the radio but getting no response I told Group that he was going down and to re-form on me.  This action by the leader (instead of properly aborting his lead position and letting me take the lead) again got us off by ourselves.  We were attempting to get the Group back into position when we were jumped from behind by a group of FW 190’s. They were firing 20 mm shells into us with predictable results.  The [Lindley] Williamson ship on my left wing stayed ‘til the bitter end when we both caught fire and bailed out.” [Eight of Williamson’s crew managed to bail out as the ship burst into flames and were taken prisoners of war.]

CENTURY BOMBERS explains that the B Group lead plane with Fitzgerald and Geary was hit “by a shower of lead”, which knocked out part of the interphone system and damaged the oxygen lines. 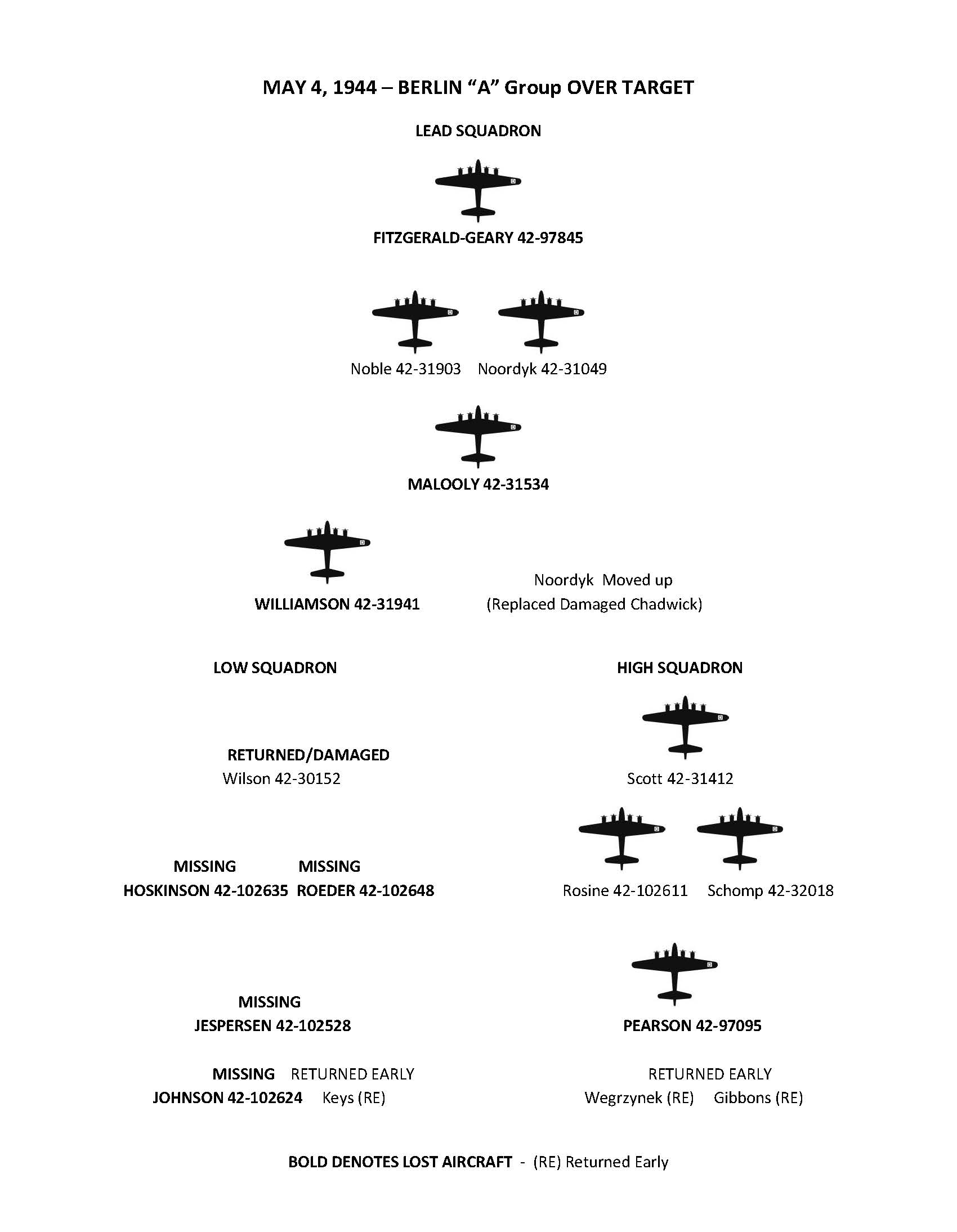 [It must be noted here, that memories and even historical documents and printed books have a tendency to be incorrect. During the course of this article, many historical documents were discovered that 100% verify that Fitzgerald and Geary were leading the 100th "A" Group, not the "B" group as has been originally thought and presented in publication........  Michael Faley / Cindy Goodman]

Bombardier on Geary’s lead aircraft, Ed Stern said, “We were all hit by 190’s.” Ed immediately decided that the situation was not very much to his liking.  “I grabbed a large walk-around bottle, but it was decorated by a neat flak hole. The navigator Dort Payne handed me the small one. The refill line was out of order, and as the meter on my bottle was fast reaching zero, I breathlessly clambered into the cockpit. Fitzgerald was sucking oxygen from a small walk-around bottle, and refilling from Geary’s line.”

Jim Brown’s history continues the story. “Back in the waist, the noise was unbearable. The engines were beating themselves to death, and the chatter of the guns was deafening.  The gun-smoke in the ship was heavy, and the smell of burnt powder was nauseating. After many [enemy aircraft] passes, number three engine had been set on fire. The situation was like some fantastic nightmare.”

Delbert Pearson’s crew, from the High Squadron, was also knocked out by fighters and disappeared into the clouds.  Nine of the men aboard bailed out safely and became POWs.  The tenth man, replacement ball turret gunner James Morrow, from the Tashjian crew, was killed.

The lone loss from the “B” group leading the wing was NELSON KING, A/C 42-31306, piloted by Emil Stiewert, who was killed with bombardier Irving Jacobwitz and tail gunner Frank Kroczynski. The rest of the crew, who were on their eleventh mission, became POWs.

Debriefing that night at Thorpe Abbotts was a gloomy affair.  Nine crews had failed to return. Of these nine crews, 34 men were KIA, with the remaining 56 becoming POWs.

The Nine 100th Aircraft lost on

From the 349th Squadron:

From the 351st Squadron: